HERNE THE HUNTER AND THE FAIRIES 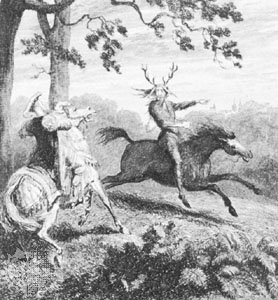 In the fifth act of Merry Wives the play turns into a carnival of English folklore. The children of the town, with Sir Hugh as their coach and Mistress Quickly as the Faerie Queen, become fairies who torment Falstaff as punishment for his lust-fuelled pursuit of two of Windsor’s upstanding middle-class wives. The only other play in which fairies feature so prominently is A Midsummer Night’s Dream, where their role is somewhat different, though comparably dark. Falstaff himself, at the suggestion of the Windsor wives, is dressed as a character in English pagan mythology, Herne the Hunter. With horns on his head he suffers the fate that Master Ford imagined for himself: a cuckold - traditionally wearing horns - being physically tortured and publicly humiliated. He is removed from the town, which embodies the values of rationality and moral certainty, to the country, in which the bestial forces of desire and greed are exposed. As Mistress Page says to her husband: “Do not these fair yokes / Become the forest better than the town?” (5.5.103-4)

It is interesting that for the wives there is no doubt, not even a shred of superstitious emotional doubt, that the stories of Herne and fairies have no reality in their town lives. Falstaff, on the other hand, wilfully gives himself up to playing the buck, a bestial version of his self-image, and confesses to a fear that the fairies are real.

Mary Ellen Lamb, in her book The Popular Culture of Shakespeare, Spenser, and Jonson, (see Critical Texts) discusses the plot hatched by the merry wives to deal publicly with the difficult position Falstaff has put them in. I do not agree with everything Lamb says, especially her use of the term ‘sort’ to replace ‘class’, as in ‘middling sort’ and ‘lower sort’. But she takes us into a territory that is is not often discussed fully in editions of the play. Here are some of the things she says in the section “Old wives’ tales” on Merry Wives:

“As Mistress Page turns to the tale of Herne the Hunter as a means of conning Falstaff into one last assignation, she first expertly enacts the role of storyteller, and then rejects that role as she carefully delineates her social and intellectual differences from its earlier tellers:

MRS. PAGE: There is an old tale goes that Herne the hunter,

Doth all the winter time at still midnight

Walk round about an oak with great ragg’d horns;

And then he blasts the trees, and takes the cattle’

And makes the milch-kine yield blood, and shakes a chain

In a most hideous and dreadful manner.

You have heard of such a spirit, and well you know,

Received, and did deliver to our age,

The first seven lines of this passage weave a spell of pleasurable terror that is the essence of ghost stories. Especially thrilling is the detail that he “makes the milch-kine yield blood.” Then, as if catching herself, she addresses the group as would a commentator or an early sociologist rather than as a participant in this oral tradition. Her description affords little respect to those who transmitted this tale: they were “eld,” and the association with “eld” and “idle-headed” suggests senility. Rather than creators, they were merely transmitters, receiving and then delivering the narrative without any inventions of their own. Most damning, they were ignorant enough to believe this tale “for a truth.” This representation implies the superiority of Mistress Page and her audience, consisting of the Pages, the Fords, and Hugh Evans. Unlike the “eld” they are youthful and modern. Rather than superstitious and idle-headed, they are rational pragmatists, their minds laboring with useful schemes, their feet firmly on the ground, and never so foolish as to believe the tale of Herne the hunter. Mistress Page’s confident knowledge that the “eld” truly believed this tale itself exposes her alienation from these traditional storytellers. Their level of credulity is impossible to determine, since conveying a sense of the veracity of ghost stories, no matter how fantastic, was a convention designed to elicit a frisson from listeners.

This supposed belief in absurd superstition is not limited to the “idle headed eld.” “Many” still act as if they accept these stories. As Mr. Page observes, “Why, yet there want not many that do fear / In deep of night to walk by this Herne’s Oak” (4.4.37-8). Who are these ignorant souls who still fear, or pretend to fear, a walk by Herne’s Oak at midnight? And who would have told this old tale to Mistress Page? Her most apparent contact with such a low narrator would have been through unnamed women of a lower sort, women such as Mistress Quickly, who could tell a tale even of the wart over Fenton's eyebrow, and the fat woman of Brentford, who traded in superstitions and the fears they elicited. It was to these old wives to whom such superstitious tales, in their rough and unedited form, in some sense, most belonged. The source of Mistress Page’s alienation would seem then to be social as well as intellectual, directed toward a low aesthetic circulated by the allegedly ignorant poor. The unlike treatment of Mistresses Quickly and Brentford suggests conflicting relationships among the middling sort to the oral tales traditionally performed by old wives in front of a winter's fire. While neither woman earned respect, the old woman of Brentford, in the person of Falstaff, was beaten as an outsider, while Mistress Quickly was readily absorbed into the citizen enactment of this tale as the fairy queen herself. However much she rendered herself of practical use to the citizens of Windsor, Mistress Quickly yet retained an identification with the low - as did tales of Herne the hunter and fairies.

….. the charivari staged in Merry Wives is far removed from the boisterous event described in historical accounts. It is uniquely bourgeois. Windsor has tamed the traditionally course charivari into a children's performance, staged before the gaze of proud and indulgent parents. There is no charivari on record that mentions any participants costumed as fairies. Children were never featured as participants. This strikingly unusual adaptation reveals not only the homogenization of popular culture, through which very different practices become mingled under one category of the “low”, but also an urge to create roles appropriate to children. The community takes their children's achievements seriously. To sing and dance together and on cue, they must attend rehearsals conducted by their schoolmaster and parson Hugh Evans for, as Mr. Ford remarks, “The children must be / Practiced well to this, or they'll ne’er do’t” 4.5.63-4). Just before their performance, Evans' direction conveys his tension that they might fall short of a polished performance: “Trib, trib fairies! Come! And remember your parts.” The reluctance of the children to project their voices motivates his anxious direction to “Be bold, I pray you.” They must watch him for cues: “Follow me into the pit, and when I give the watch-ords, do as I pid you. Come, come; trib, Trib!” (5.4.1-3), This degree of stage anxiety - or indeed any stage anxiety at all - is utterly foreign to accounts of charivaris, loud and rowdy affairs conducted by adults intending to shame, not to impress. Creating rough music by banging utensils on pans did not require watching for cues from a conductor. This citizen intervention in the concept of charivari foregrounds the importance of well-trained children in the self-narratives of the middling sort. As the children burn Falstaff’s fingers with tapers and turn him about, they dance and sing in what emerges as an uncannily graceful performance of torture. As their discipline of Falstaff’s “sinful fantasy” surely impresses in their memories the absolute necessity for sexual chastity, it also subordinates his very real pain to the demands of the aesthetic. The children's role in the charivari not only validates the imposition of physical harm on anyone, whether vagrant or knight, who violates the moral norms of Windsor; it also teaches them that this pain does not matter.”

Lamb goes on to compare this fairy performance with the kind of masque that might have been staged before an aristocratic audience. It is an interesting exploration of the distinctions in popular culture in the Elizabethan and Stuart theater. It reminds me that one of the things that Shakespeare does extraordinarily - and radically - well is to bring together the tone and method of literary drama, tragedy or comedy, with popular entertainment. And it reminds me of how well he listened to the way ordinary people spoke to each other in pairs or in groups.